My name is Jack Ryan, and I am a fourth-year graduate student in the Mathematics Department at the University of Tennessee Knoxville (UTK). I currently serve as the President of the Math Graduate Student Council (MGSC) and the Vice President of the UTK chapter of the Association for Women in Mathematics (AWM).

I previously served as the Vice President of the Graduate Student Senate (GSS), Secretary of the MGSC, and the Secretary of OUTGrads.

In June 2016, I received dual degrees in mathematics (B.S.) and theatre (B.A.) with a minor in computer science and a concentration in the college scholars honors program from North Central College in Naperville, IL. In May 2019, I received a Master of Science in mathematics from the University of Tennessee. I am currently working towards my Ph.D. under the supervision of Dr. Joan Lind.

My long-term career goal includes being a professor of mathematics at a small college or university as well as pursuing a career in higher education administration. 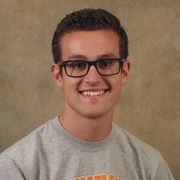